Tarangire just south of Serengeti and Ngorongoro Crater occupies a total area of 2,600 square kilometers, not huge in Tanzania but bigger than for instance Masai Mara. Large parts of this animal-rich national park are covered in sparse acacia forest. Everywhere in the hilly landscape you will see the giant baobab trees characteristic of Tarangire. On the horizon, the mountain peaks of the Ngorongoro volcanic highlands rise.

All over Tarangire you will see the huge, ancient baobabtrees. Some of them are hollow were previously used by poachers to hide and wait for animals.

Eastern Tarangire is a huge marsh land wrer there is always water and animals concentrate aroun dit when the savannah is dry.

Between August and november when large parts of the park is very dry the animal concentration around the river is amazing .

If you have an extra day, go to the southern half of Tarangire where very few tourists go. You will be left all alone with the amzing scenery and wildlife.

The driest season (july until november) is hot and dusty but the animal concentration around tarangire River, the marsh and the few remaining waterholes is second to none. 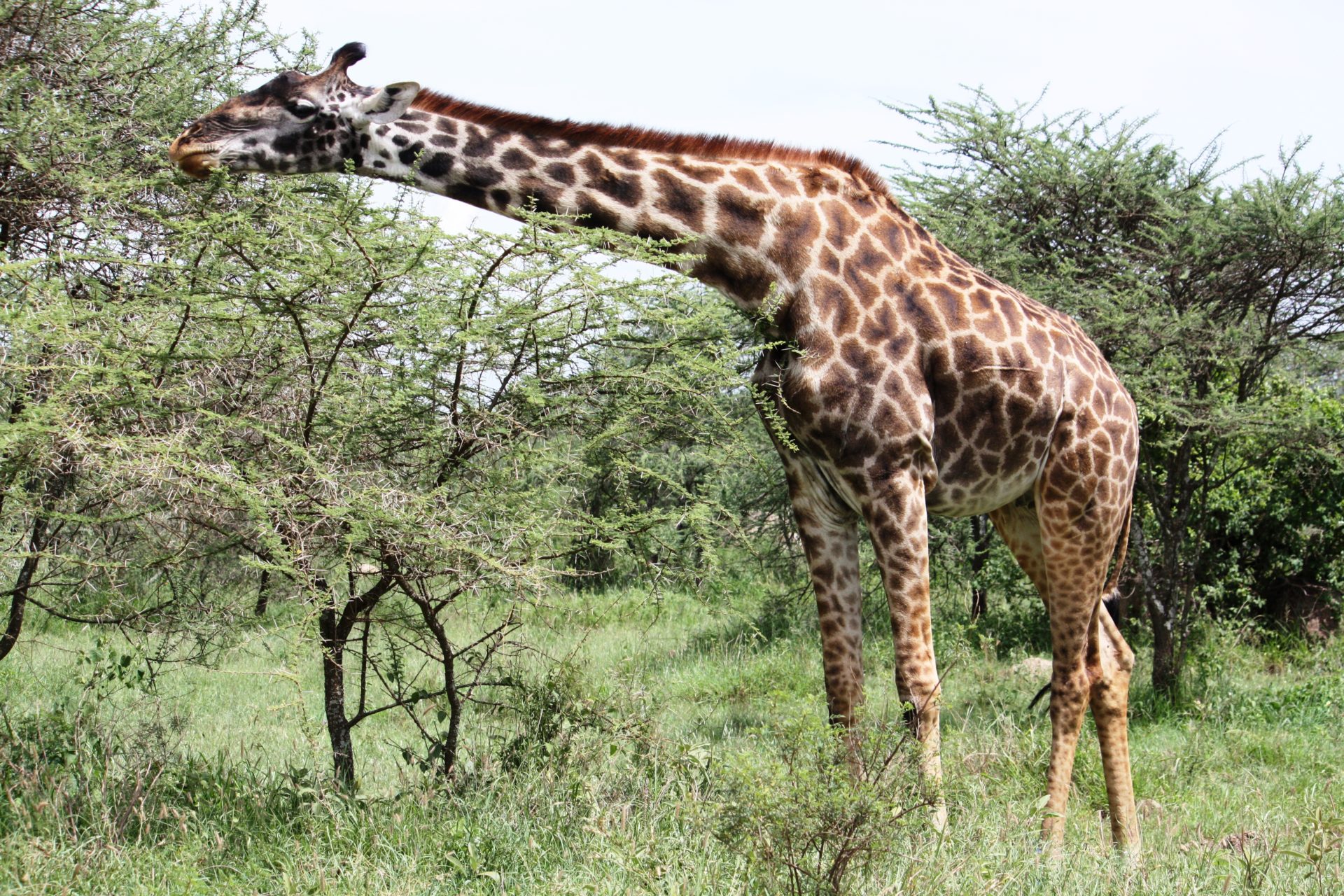 Tarangire has many trees and therefore also many giraffes

Tarangire has more trees and bush than Serengeti. The landscape is dominated by tall grasses, giant ancient baobab trees, rolling hills and the impressive valley where the Tarangire river flows. The river attracts large amounts of animals, especially during the dry season June to November.

Tarangire is a park where wildlife shifts a lot between different times of the year. During the dry season, July-November, the park is full of animals. The animals gather mainly around the Tarangire River and the vast wetlands of eastern Tarangire, but also around smaller, permanent water holes and streams. During the dry season, the animal concentration around the Tarangire River is greater than anywhere in Tanzania except for the Ngorongoro Crater.

After the short rain (usually they start at the end of November) the waterholes and streams start to fill up and the animals start to spread out on a larger area and many animals leave the park. Elephants, Zebras, Wildebeest and some other herbivores graze on the savannah outside the party, and some walk to Lake Manyara or as far as Lake Natron.

In June, the animals will return to Tarangire National Park. First, eland and oryx returns and then elephants. By the end of August, most of the animals have returned to Tarangire. The Tarangire River, the wetlands and the few remaining watercourses and less waterways, this time, accumulate massive concentration of animals including large carnivores such as lions and leopards that are attracted to the abundant supply of prey. Tarangire is one of Tanzania’s very best safari parks between July and November, but after the short rain when the animal start to spread out, the park is noticeably less good for game viewing.

Tarangire tends to be overshadowed by Serengeti and the Ngorongoro Crater. This is not quite fair. Certainly, there are even more animals in Serengeti, the concentration is higher in the Ngorongoro Crater, but Tarangire offers a beautiful landscape, characterized by the Baobab trees and a genuine safari experience that attracts fewer visitors than Serengeti and Ngorongoro. Well worth a visit on the road to Serengeti is this park that nobody would miss if it was not close to Tanzania’s world-renowned parks. No other comparison could cause Tarangire to fade. Tarangire is home to the richest wildlife (in terms of large mammals) in the world beyond the Serengeti ecosystem. 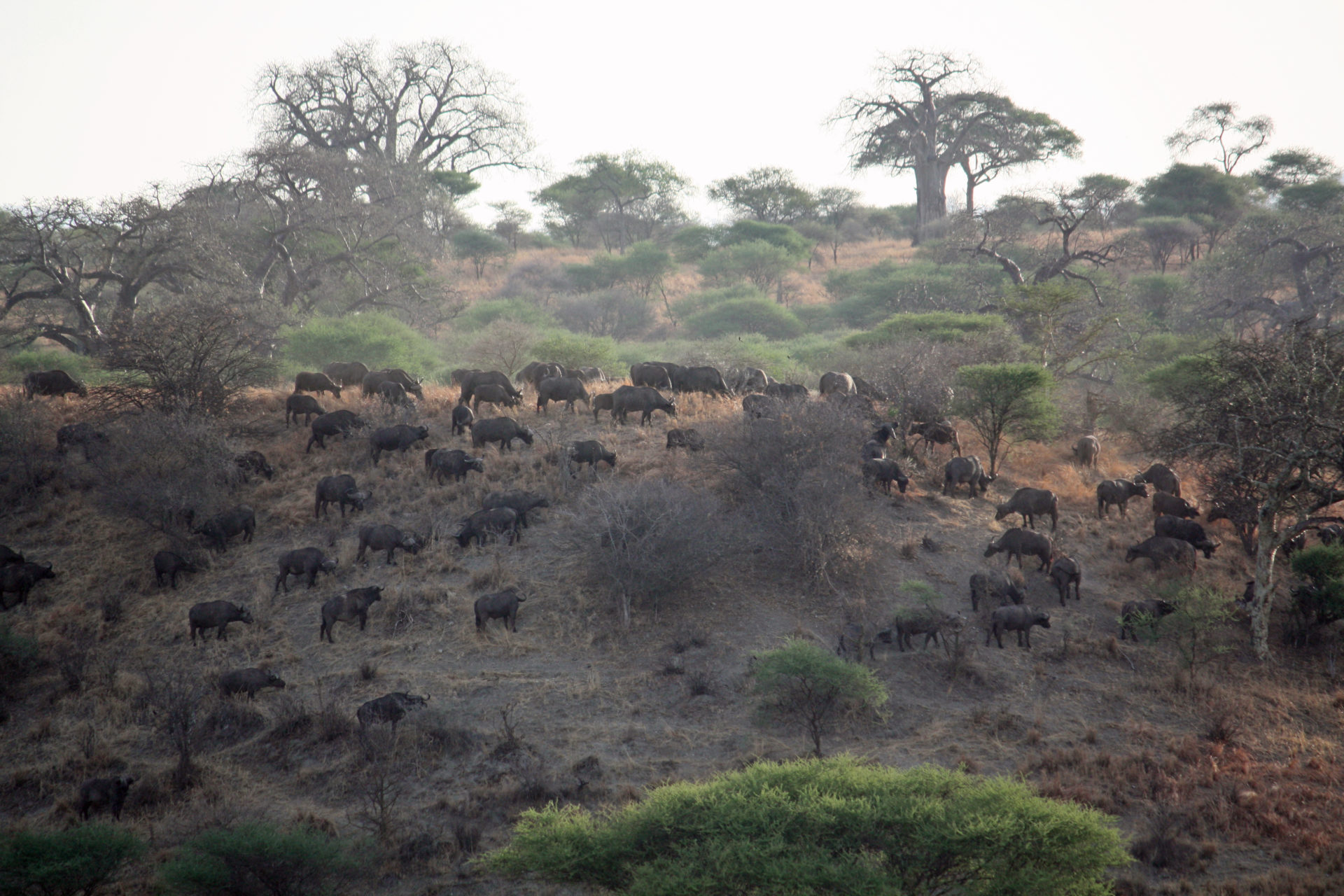 Buffaloes walking up the slope from Tarangire River

Tarangire is on lower altitude than Serengeti and Ngorongoro Crater, and the climate is therefore warmer. Tarangire is also located in an area that gets a little less rain. The rainy season is March to May, the dry season July to November, while the months of June, December, January and February are a little mixed and above all unreliable. Some years there will be some rain even during these months while in other years they may be very dry. The temperature is the lowest in June and July and the warmest between November and March when it can be very hot in Tarangire.

The best time to visit Tarangire is doubtless between July and November when the animals gather in large quantities around the Tarangire River, wetlands and the permanent water sources. December to February, the park is still good and can offer good animal viewing especially for those who spend some extra time and maybe spend more than one day in Tarangire. March to mid-June Tarangire is a rather poor safari park because the animals are so scattered. 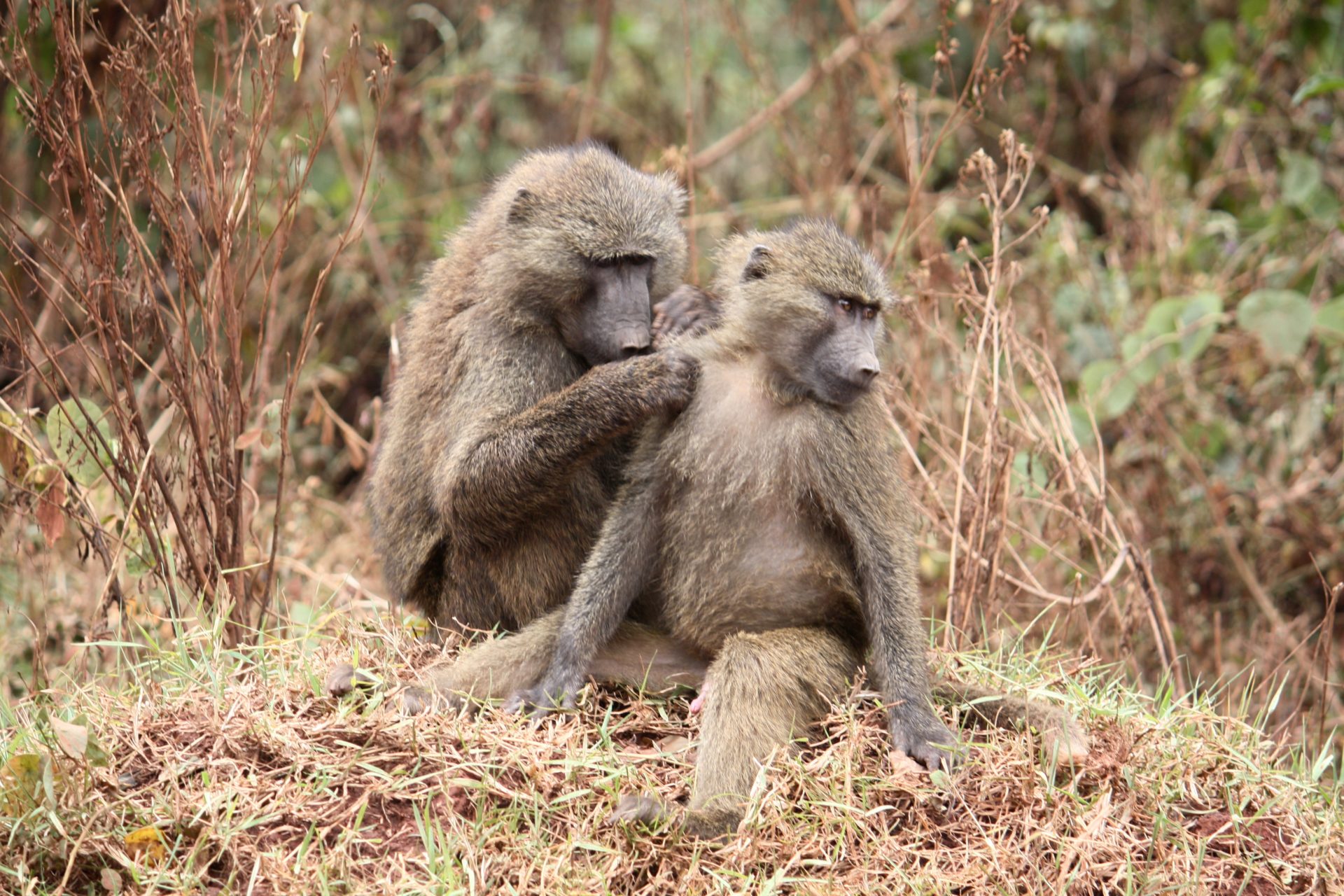 Baboons are quite common in Tarangire

How to get there

The easiest and most common way to get to Tarangire is by car from Arusha. In addition to the last bit, it goes over paved road and takes just over two hours. It is possible to visit Tarangire during in just one day or with an overnight stay as the only park in a safari itinerary but it is also a very good park to visit as part of a longer program.

Most common is to include Tarangire in a four to six-day safari in northern Tanzania. The most common thing is that Tarangire is first on the program, but it is also possible to finish in Tarangire. Most people only stay one night in Tarangire and then only see the north of the park. Tarangire is a fantastic safari park and for those who want to see a little more, we can recommend staying for two or three nights and maybe staying at one of the lodges further south of the park. Hiking safari in Tarangire with Olivers Camp as a starting point is an experience beyond the usual. 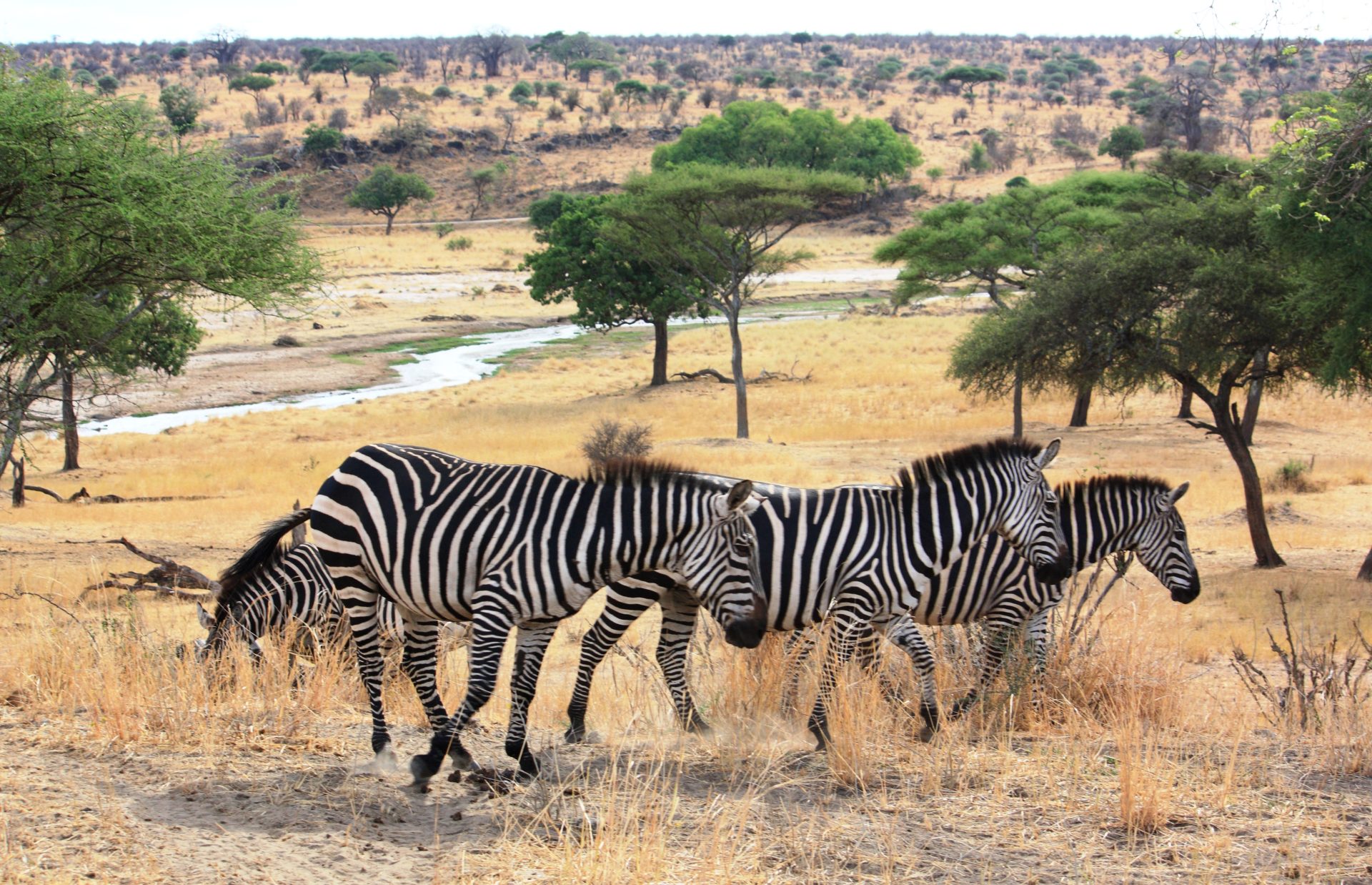 Zebras with Tarangire River in the background

There are off course many safari lodges in and close to Tarangire, here are some of our favourites.

Lake Burunge Tented Camp
Lake Burunge Tented Camp is located just outside the park on the shores of Lake Burunge. The camp has large rooms in permanent tents build on wooden decks. All tents are comfortable with proper beds and toilets with shower. It is a great value for money option, especially if you do one day in Tarangire and then move on to other parks. Lake Burunge is in an animal migration corridor and many herbivores move through this area in November-December and then again in May-June on their way out of and back into Tarangire.

Oliver’s Camp
Oliver’s Camp is a very exclusive small luxury tented camp in the far south of Tarangire, more than an hour’s drive away from any other camp. This is in our opinion one of the best safari lodges in all of Tanzania. The camp has only ten tents, including one honey moon suite and one family tent that sleeps four. The location gives total privacy with game drives in areas where hardly any tourists go. Oliver’s Camp also have permission to do walking safari with fly camping inside the park.

Tarangire Sopa Lodge
Tarangire Sopa Lodge is a large and comfortable lodge that is more of a hotel than a traditional safari lodge. It is a good option for families as the rooms can sleep four persons and there are interconnected rooms. The rooms are very spacious with huge beds and a proper bathroom. The lodge has a pool which is great for hot days in Tarangire. The lodge is located a bit south of the main gate and the area to the north of the lodge is where most tourists go where as the area to the south often is almost empty which makes for great game drives.

Tarangire Tree Tops
This is a truly spectacular lodge where the rooms are built on platform up in huge baobab trees. Truly an experience in itself. The lodge is located on the western side of Tarangire which used to be a huge drawback since the only gate in to the park was the main gate in the north end meaning that there was a long drive to get in and out of the park if you stayed at Tarangire Tree Tops. But since the Sangaiwe Gate in western Tarangire has been opened this is not an issue anymore. 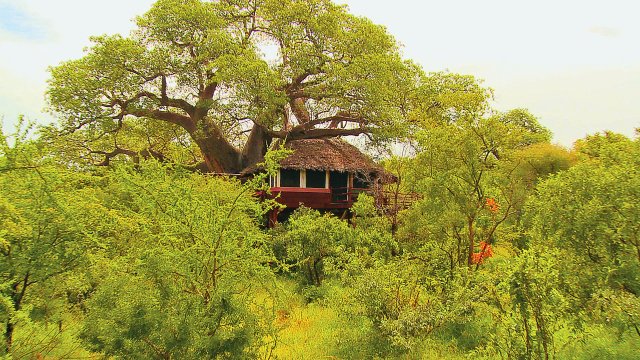 Rooms are built up in baobab tress at Tarangire Tree Tops 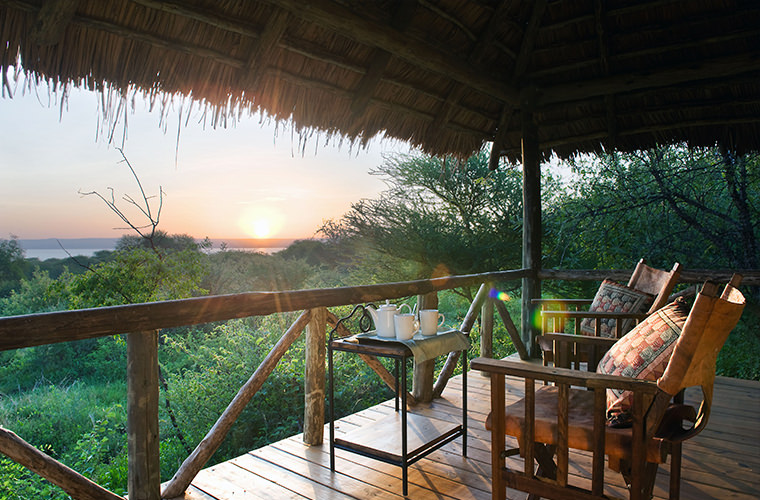 View from a balcony at Lake Burunge Tented Camp